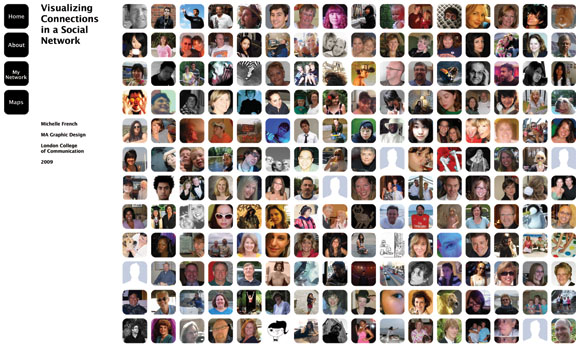 The introduction page for Visualizing Connections in a Social Network

The culmination of a research project on Social Media and a mapping project presented in Flash.

My canine significant other got her own Facebook page. As the user mouses over the “chicklet” representing that person, the name, photo, and connection information appears on the left and the names of each persons connections show up on the larger field on the right. The connections are color coded as to how they became part of my own network. Note: within 24 hours, Sparkie had as many Facebook connections as I had in 6 months.

Visualizing Connections in a Social Network
Yes, I got my Masters in Facebook

In my search for a project for my Masters in Graphic Design at London College of Communications, University of the Arts London, a classmate suggested turning Facebook into a real book. Well, the volume of information quickly became overwhelming. I did a few different projects for one section of my course. For the Major Project I did volumes of research that touched on the anthropological and sociological as well as the marketing communications applications of all social media. My final visual project was a mapping of my own social networka type of mapping that could have rendered vastly different results if used for a project like the Framingham Study published in 2009 by JAMA. ****My 14-year-old nephew was not impressed that I had done a Flash project on Facebook for a Masters degree. “I could have done that” he said. I told him “Of course, (and he probably could have done the Flash better) but, could you have written a book that made it sound like an intelligent thing to have done?” 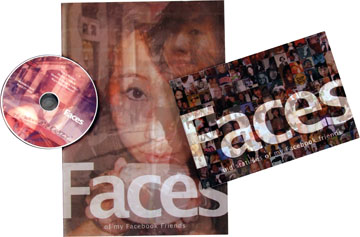 in an earlier Unit, I compared the way that people presented themselves visually. One book overlaid similar images, the smaller paired like and opposite images and one status message to give context to the narrative. 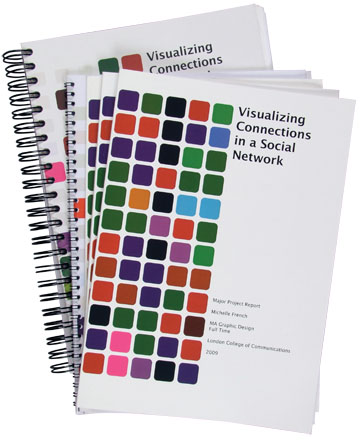